The Gantt chart is one of the most popular tools that project management professionals use today, but would a strip board be better?   Gantt charts have been a robust method of graphically representing a project schedule and the relationships with other tasks in that schedule for a century.  The problem I have found though is they can be difficult to understand.  Unless the person observing it has prior experience with Gantt charts and knows what to look for, the first expression one gets is usually a blank stare, then a look at the beginning and end dates on the left that appears like a spreadsheet and then a question about what tasks are specific to them even if the resources have been entered and appear on the bar in the graph.  So what tool can a project manager use to better communicate a schedule?

One effective alternative to a Gantt chart for a graphical representation of a schedule is the strip board.  Also known as a production board and made popular by the film industry, it shows the sequential order of a film on strips of paper that can then be moved around by the director to make up the scenes in a movie.  For a project management application, instead of a director and scenes, you have a project manager and tasks.  The project strip board can be constructed with the name of each resource across the top and the time sequence along the left column.  Fergus O’Connell provides a brief description and example in his book ‘The Competitive Advantage of Common Sense‘ in chapter 4 on page 65.  By constructing a project strip board, the number of resources, the tasks and the duration of each task need to be identified for the board to be meaningful.  In addition, the board can be distributed to each team member where they can see what they need to do, when and how it relates to other people on the team.  Some other advantages are:

– Can add a column for cost and sum up to give you total.

– Drives the PM to put names to tasks from the beginning.

As an experiment, I re-created the exercise that we did in class Saturday, ‘A Project Management Decision-Making Game’ using the project strip board method.  Though anything is better than pencil, paper, and losing about half of an eraser, I found the strip board method very easy to construct in Excel and easy to manipulate when changes were made.  The only disadvantage I found was the ease of tracking the relationships between tasks unless it was done by the same resource.  With some additional experimentation though, using different color backgrounds or some of the graphic arrows available in Excel may help. 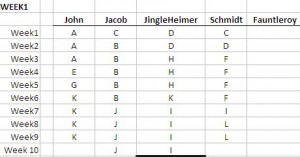 Has anyone utilized a project strip board on a project?  Do you think it might be a tool that can be used for showing activities during the events that project teams are hosting?

One thought on “Don’t Gantt. Strip!”