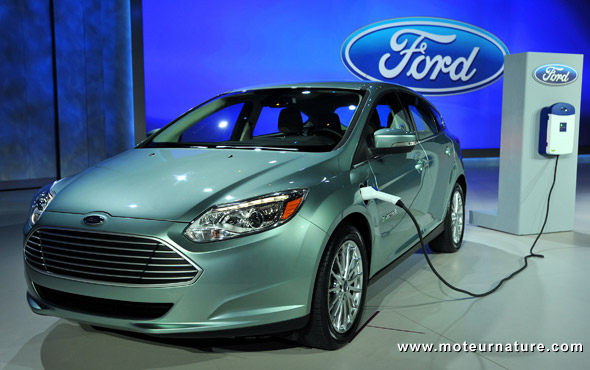 Ford Motor is making a bet that the future of cars turn to to be dominated by hybrid vehicles. This view is one most large automakers such as Toyota are sharing. Contrary to to exciting start ups like Tesla Motors, Ford thinks that 25% of auto sales will be electric by the end of the decade, but predicts that 90% of these sales will come in the form of hybrids. Ford points out that hybrid vehicles have two very distinct advantages over electric cars. First, it is cheaper to make hybrid cars that use a gas motor combined with a smaller electric batter to move the car. This is in large part because electric batteries are very expensive. Electric batteries in hybrid cars are very small compared to fully electric vehicles. This has been able to keep the cost of hybrid vehicles down while keeping the cost of fully electric cars high. And second, hybrid cars resemble a driving experience to a normal a car. There are many advantages to this such as refueling of a hybrid car. Hybrid cars rely on gas motors for most of the driving, which allow the car to be refueled at any gas station. Electric cars can only be charged at home, allowing for the occurrence of the car to run out of gas far away from an owners charger.

Despite Ford’s prediction on hybrid vehicles, Ford is making sure it is capable of producing fully electric vehicles if their prediction were to be proved wrong. One of the strategies Ford uses is to build different power sources for its already existing cars. This can be seen in a fully electric vehicle such as the upcoming electric focus. Ford can increasing or decrease production based on demand. They can also be built on existing assembly lines right along with the existing models. This allows Ford to test the market conservatively, as they can scrap the power source but keep model if demand was not there. This conservative strategy is a way to test the market but also keep the high costs of producing a new car to a minimal. Ford is using a very smart operation management strategy with regards to its hybrid and electric cars. This will allow the automaker to keep up with demand and keep inventory to a minimum to save costs.

Is Ford’s prediction right about hybrid vehicles dominating the market? Or will other fully electric vehicles such as the Tesla Model S and the Nissan Leaf be the next big car of the decade?