Being a huge BMW supporter I thought it would be interesting to talk about how the company is breaking new grounds with an all new BMW i electric car concept. Competition for the 21st century car, is all about better gas mileage, comfortability and sleek looks, and with such competitors as Tesla, Fisker and Honda paving the way for electric cars, BMW would like a chunk of the action. 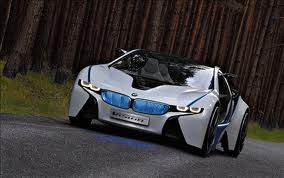 Know many of you might be asking what makes BMW stick out anymore than any other company working on electric cars? Well I’m glad you asked. BMW’s main principal or goal is to “provide efficiency with exhilaration,” http://www.bmw-i-usa.com/en_us/concept/and they plan on doing so by not only creating a fuel efficient electric car, but by adding revolutionary new technology to do so. First BMW went through the liberty of building there own electric engine that they like to call “eDrive,” which alone uses an optimized Lithium-ion battery  cells giving it the same performance skills as  a BMW 5 series with 0 interruption during the acceleration. But they didn’t stop there, while working on speed, BMW went the distance and came up with a composite carbon fiber reinforced plastic body layout. Having success with carbon fiber roofs on there 3series, BMW found that not only would creating a car out with 1/3 carbon fiber be 50% lighter than steel, but it’s also just as strong and longer lasting. After years of research BMW debuted  its i8 concept back in 2010, with a sleek new look, which they designed specifically for aero dynamics with a modern touch. For the first time BMW decided to also make this car as eco friendly as possible  with naturally treated raw material interior that not only has natural fibers and leather but consist of 25% recycled plastic. Although a price figure has not been complied yet BMW assures its customers that there electric cars which are expected to start production by 2013 will be not only be environmentally friendly but more affordable than competing electric sports cars.
So lets recap, BMW is re-engineering there cars to be eco friendly, fuel efficient, sporty, fast, aero dynamic and still cheaper than there competitors, but what does this have to do with Operations Management? Well as discussed in chapter 5 companies sometimes go through a phase of product decision, or in other words develop product strategies that meet the markets demand. BMW is doing just that by noticing the consumers needs for a fuel efficient modern car and there implementing there new technology to deliver. Know while they still are in the introduction phase of the products life cycle, they soon plan to bring there car to the market and if I must say  I’m excited to see what they can do.

2 thoughts on “BMW putting the i back in Innovation”