In the article written by Bruce Einhorn “Apple vs Google: Starkly Different China Experiences”, author narrates the different approaches two companies used when they entered market in China, and how the results, which basic on the management strategies they applied, varied as the time going. As we all know, Google has been obtaining the popularity for a longer time compare with Apple, and it also had entered Chinese market much earlier than Apple did. In the beginning, Google had an ambition to replace BaiDu, which is the champion search engine known in the market. However, the development didn’t work out the way Google wanted. First of all, the similarity of searching function between Google and BaiDu is high; secondly, Google, which is so used to the condition of marketing in U.S, tried to maintain the same way of management in China and failed to deal the relations with foreigner government, therefore, after awhile of adjusting under hard circumstance, Google decided to quit itself from mainland China instead of struggling with the awkward situation.

While Google seemed had a horrible nightmare, the story what happened to Apple is totally different. Author mentioned in his article that “China account for 20 percent of Apple’s sale in the first quarter of this year and is now the company’s second biggest market, after U.S”. Acknowledging the good management is the first step toward success, we can see that Apple, as a star that rising rapidly recent years under the leading of Steve Jobs, created its kingdom over worldwide. People give the admiration of the fancy models of new innovation of technology it provides and willing to spent money on the products. 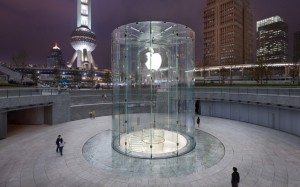 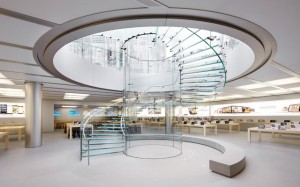 What’s also a sagacious idea in managing the development of a foreign country, according to author, “there are only two stores in Beijing and three in Shanghai,” we can observe that Apple didn’t occur as an overwhelming brand, instead, the few stores create an even nice market where the number of demand is much more than the number of supply, therefore, in China, where now has the phenomenon that in every new season fans of Apple go to Beijing or Shanghai to purchase the products. Now, further step was built, that Apple is looking for a partner for iphone in China. As we can see that it is developing along the route it went through in U.S, meantime, it is approaching the goal in a different managing way.

Apple is a leading technological brand which is representing the technology people have during this time period. We cannot deny that Google also owns a huge market, yet Apple is more sophisticated in the management of a foreigner country, like China, which is “the second-largest economy in the world”. Nowadays, when everything is turning to the global market, the ability of creating a nice fitting management is a key to success.

What do you think the management for a foreigner country? Is it always functioning the same for every market that company enters?