The importance of project management could not be limited to the private organizations to make more profit and be more prosperous. Project management is a common part of our everyday life. However, it could be obvious and more important in the public and government sector.

We learned that the project management go through critical phases: planning, scheduling, and controlling. Throughout each phase, there are many critical success factors CSF that should be viable in order to make the project objectives in place.

Whether, its private or public project I can see the following CSFs are a must

1. Top-down commitment.
2. Having time to plan.
3. Careful tracking and control.
4. Having a capable project manager, and
5. Good communications.

I found an interesting article “Sewage scandal story can ‘shake Saudi’ http://www.thenational.ae/news/world/middle-east/sewage-scandal-story-can-shake-saudi#full  that prove and show how governmental project can lead to crisis. In his article, Mr. Wael Mahdi showed that the mismanagement of the sewage project system in Jeddah, Saudi Arabia was the main reason behind wiped out thousands of homes in Jeddah and killed at least 123 people in Jeddah floods in 2011. 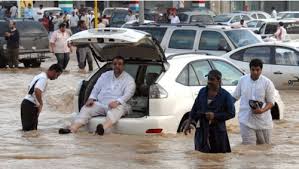 Because of the delay in the project, the government lost hundreds of millions of Saudi riyals. The article as many others showed that there were abuse for the public money from the project manager who took the money allotted for the project and built himself palace in San Francisco and Jeddah equipped with a disco and a bowling alley. An Incomplete flood water drainage
and sewage system was the main cause for the disaster, arrest of more than 40 municipality officials and contractors.  The
following link is one video of many that showed the suffering of Jeddah’s people during the bad time. http://www.youtube.com/watch?NR=1&v=D4GGQUcvHhQ&feature=endscreen

Last Wednesday, Two men have been jailed in one of the first convictions in a Saudi Arabian corruption crackdown started after deadly floods hit Jeddah in 2009 and 2011. “The defendants are convicted of the crime of bribery. Each will be jailed for five years, starting from their detention date, and will be fined $186,000,” http://www.constructionweekonline.com/article-17126-two-jailed-over-jeddah-floods-corruption/.

I can see that the lack for top-down commitment and lack of communication in addition to ethical decision in this critical project were the main reasons behind this catastrophe. Would you believe in the importance of CSF and ethical issues in project success?

5 thoughts on “When Flood make Blood!”